By Julian Nabil and Sara Mohamed

The economics of real estate rests on supply and demand curves for being closely intertwined concepts, determining production and resource intensity, as well as, consumer spending. Therefore, Invest-Gate puts the Egyptian property sector under the spotlight, examining the current conditions of the two crucial poles of the industry, while laying hands on the trending tactics used by developers to excel and ace the market circumstances.

Egypt’s overall real estate supply has been generally witnessing an upward trend for two consecutive fiscal years, and Invest-Gate foresees a 9% growth in FY 2018/19, with the pipeline volume most likely bringing in 356,550 residences, compared to 326,263 units in the prior-year period, CAPMAS previously uncovered.

However, Mena Group Founder Fathallah Fawzy is concerned about the fails-to-deliver shares of small-sized property developers, anticipating their potential setback to finalize the planned products on-time if a liquidity stress scenario emerges.

“This may come into play in the wake of the various payment facilities and flexible plans offered by real estate companies to lure as many purchasers as possible, including no upfront costs and installment terms of up to ten years, together with the government-backed mortgages,” Fawzy further explains. 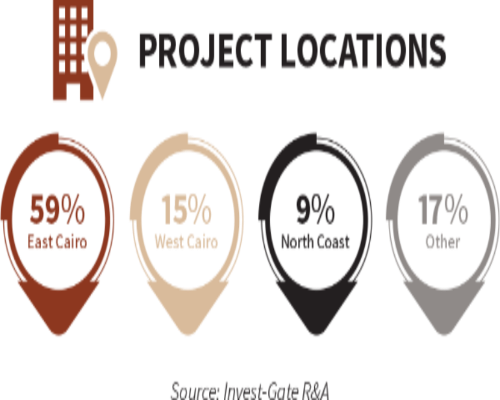 – Ajna Developments, for instance, has gained a foothold in the Egyptian real estate sector with its flagship development in Ain Sokhna, called “Carnelia,” aiming to pump investments worth EGP 3 bn for its implementation.

– Besides, GV Developments stepped into the market with its EGP 9 bn mixed-use project on the North Coast – or “White Sand,” representing a quantum leap in modern tourism industries.

Speaking of second homes, the current market dynamics, including the lack of affordable houses and the augmented focus on the niche segment, have created an almost classical seven-year itch in the vacation-house business. Thus, high-end developers need to bust out the paint and spruce up their curb appeal to attract further middle-income buyers, and thus, seal a greater number of deals by extending more feasible housing products in coastal areas for this specific income bracket, which represents the majority of the local population.

The prevailing situation poses some troublesome paradoxes as the overall market performance of the top ten listed developers slowed down by 22% year-over-year (YoY) in the first nine months of the present fiscal year. More profoundly, it retreated below the EGP 498 mn starting point recorded two years ago to hit EGP 455 mn in the January-Septem- ber period of 2019, according to the net profit index of the top ten Egyptian Exchange (EGX)-listed real estate companies.

Sixth of October Development and Investment Company (SODIC), for instance, partially attributed its shortcoming to “the lower operating profitability,” alongside an increase in interest expense due to higher credit utilization, according to the company’s recent financial statements.

Mena Group’s founder expects tight liquidity conditions to arise further among private property developers between 2022 and 2023, yet he argues that financially strong companies such as Talaat Moustafa Group (TMG) Holding, which posted an 18% rise YoY in the first nine months of 2019, will be able to put up with such stumbling blocks, on the back of having a diverse range of income-generating assets.

If you want to get a grip on the demand of the Egyptian real estate market, read the “Demand vs Supply: Booming or Busting in 2019? – Part I”

Over and above, you can explore the property sector’s full wrap up at Invest-Gate’s December issue.