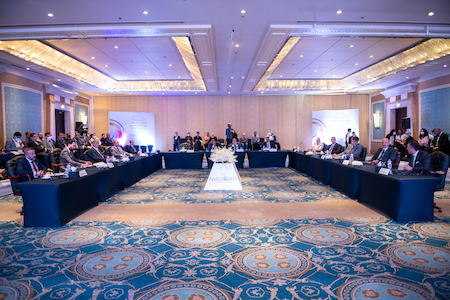 Invest-Gate’s roundtables have bounced back after the harsh circumstances caused by the Coronavirus pandemic. Under its title “Real Estate Market Recovery Post Recent Gov’t Decisions… Opportunities and Challenges” in cooperation with the Egyptian Businessmen’s Association (EBA) on September 8, the roundtable focuses on the market’s strategy to rebound after the gloomy repercussions of the pandemic. Additionally, it showcases the main factors contributing to boosting the performance of the real estate market in the near future.

Invest-Gate’s CEO Mohamed Fouad highlights the importance of such events for continuous cooperation with main market players, as well as governmental representatives, in a bid to achieve market revival, especially after the pandemic havoc. “Egypt’s economy is amongst the top economies in the world standing tall against the pandemic, in addition, the real estate market has contributed to the economic stability status. Thus, it has become a serious need to address such changes, the government’s steps to achieve more enhancements, and how the sector can move forward,” he notes.

Additionally, Fathallah Fawzi, Head of Construction Committee at the EBA clarifies that the real estate market has experienced several difficulties due to the pandemic headwinds, which has pushed the real estate developers to depend on e-commerce to cope with the new conditions. Besides, he praises the late governmental decisions and their role in accomplishing more successes.

The roundtable’s first session discusses the vitality of the recent real estate mortgage initiative for low- and middle-income, with a declining interest rate of 3% and an installment period of up to 30 years.

Waleed Mokhtar, CEO of Iwan Developments, stresses that the real estate developer should play his role, and banks should handle the clients’ financing process. “The market will be better regulated if each player can stick to his own role,” he says.

Mokhtar adds that more guarantees should be available to regulate the relationship between the real estate developer and the client, highlighting that one of the challenges facing the mortgage implementation is the client’s income proof.

Ahmed Issa, CEO of Retail Banking at CIB, says, “The bank has cooperated with several real estate developers to ease the mortgage procedures on clients,” adding, “A temporary legal structure has been created to guarantee the bank’s rights in case of clients default, hoping that international mortgage lending standards would be applied to improve the registration and mortgage method.”

Nader Khozam, chairman of Go Khozam Developments, calls for financing under-construction units. “The mortgage plan should include units that are under construction with the project land as a guarantee and given the developer’s portfolio and value in the market.” If achieved, Khozam believes, “This will further flourish the market and lessen the price burden on clients and ease capital on developers.” However, Issa confirms that financing individuals on under-construction units will not happen to eliminate all mortgage risks.

In response, Asser Hamdy, chairman of OUD, suggests the possibility of financing projects that are 30% to 40% executed to solve the financing problem.

Tamer Erfan, CEO for Investment at Al Ahly Sabbour Developments, points out that the interest rate is high and calls for reform and simplified procedures to meet all market needs. “With the current interest rate, most of the clients eliminate the mortgage option and resort to the payment plans by developers,” he comments.

The current mortgage finance plan remains limited to specific income brackets and complicated to some real estate developers, to which developers object. Hisham El Danasoury, CEO of Jumeirah Egypt Real Estate Investments, points out, “Mortgage initiatives are limited to certain units and categories. This could be expanded to include unit types with higher values and extend payment periods to facilitate the purchase process.” Furthermore, Basheer Mostafa, CEO of First Group Developments, comments, “The mortgage system should be simplified. It often contradicts the developer’s business strategy.” “Banks should acquire some internal regulations to loan developers until the project launch following its 30% completion as directed by the presidency,” he suggests.

Nehad Adel, CEO of KVRD, stresses the importance of mortgage in the current real estate market as it will inject more cash into it. Adel, also, calls for more facilities and ease of conditions. “Today, clients care less on interest rates but on installment plans,” he comments.

Along the same lines, Hisham Moussa, managing director of Redcon for Offices and Commercial Centers (ROCC), explains that the 3%-initiative can be developed in accordance with the project and real estate developer, with different mechanisms.

Alaa Fekry, chairman of Beta Egypt for Urban Development, stresses that an organizational structure for the real estate sector should exist to define who is the developer. This will help achieve credibility for clients, and in turn, accomplish market revival through the mortgage.

Mohamed Banany, managing director of Real Estate Domain (RED), expresses his optimism about the coming period of the real estate market, due to the changes and new ideas in the sector, praising the Egyptian state’s policy. He affirms his support to the president’s directives about not to market any real estate projects unless 30% of the project is constructed to eliminate the sector’s randomness, remarking that these procedures are followed in UAE and European Union which contributed to market revival.

The roundtable’s second session discusses the presidential directive not to launch or market future projects prior to its 30% completion in the presence of Khaled Abbas, Deputy Minister of Housing, Utilities, and Urban Communities for National Projects.

Abbas confirms that the state is seeking to organize the real estate market amongst its three pillars; developers, customers, and the entity offering lands, in parallel with preserving the rights of these pillars.

He adds, “The state’s decisions aim at speeding the construction rates in order to cover the market gap, as the demand for the real estate market reaches 250,000 units yearly. Regarding the supply side, developers deliver around 15,000 units annually.”

For his part, El Danasoury elaborates, “This is still a directive from the state, but it has not yet been translated into an implementation mechanism. We expect that the state will take time to study this matter in order to formulate the mechanism that is compatible with all parties.”

In this regard, Mokhtar points out that the state has to pay attention to the existing contracts when developing a new mechanism since the implementation of the new decision will require developers to re-examine the feasibility of existing projects.

In the same vein, Khozam declares, “This directive must be implemented on several stages. One of the proposed mechanisms is that the developer commits to pay 30% of the price of the land.” He further suggests, “In order to regulate the market and maximize profits, I suggest activating the participation between the private sector and the state in real estate projects, whether through the participation in assets, or revenues.”

For his part, Adel points out the pivotal role of the real estate sector in the Egyptian economy, as 27% of Egyptians are involved in urban development during 2020. Moreover, he warns, “I am afraid that the implementation of this directive will reduce the real estate supply due to the developers’ inability to keep pace with new mechanisms, which may lead to a drop in the land price.”

In the same context, Mostafa explains that sudden decisions could be anxious to the developer, especially that the real estate market is witnessing instability as a result of some changes, including the entry of unplanned projects, and the increase in the types of taxes imposed on the developer.

Additionally, Moussa comments that the state’s directive raises the expectations bar of the end-user. Regarding the guarantee of consumer rights, he suggests using the developer rating as a guarantee that the project will be implemented and delivered to the consumer on its specified date.

Hamdy, chairman of OUD, agrees with Mostafa that the state’s decisions should be expanded to be an inclusive system for all players. He further explains, “In return to the developers’ commitment to finish 30% of the project, there must be guarantees that oblige the customer to pay the installments, in parallel with extending the payment period of the land price. Accordingly, the three pillars will abide by the rules.

Moreover, Fekry comments, “The presidential directive will have a positive impact, as it will accelerate the delivery of units. However, this will have a negative impact on sales.”

Additionally, Erfan stresses that the market is negatively affected by the entry of novice or non-professional developers, pointing out that allowing developers to register the property unit before its completion will contribute to better regulation of the market.

The roundtable concludes with the real estate developers’ optimism about the future of the real estate market, especially under the government’s directives to achieve market flourishment and move forward in the urban development plan.