Commercial real estate represents one of the main pillars of the Egyptian property market with sectors such as office, retail, and hospitality contributing effectively to the overall growth of the market and playing a leading role in driving the entire economy. Invest-Gate tries to offer a glimpse into these sectors’ performance over the year-to-date period, analyzing the recent data and highlighting the most important opportunities and challenges in the market.

The hospitality sector continued to act as the main supporter of the overall commercial real estate sector, with Cairo’s hotel supply remaining steady and occupancy rates showing positive trends over the course of the first nine months of this year, on the back of the country’s improved tourism rates.

Official figures showed that Egypt’s tourism sector generated around USD 4.8 bn during the first half of 2018, recording a 77% increase versus the same period of the previous year.

Cairo saw a stable hotel supply, standing at 23,300 rooms in the past three quarters. However, further 623 rooms are expected to enter the market by the end of 2018 with the completion of the Hilton Maadi and St. Regis, maintaining the annual growth streak, according to JLL’s Q3 report. 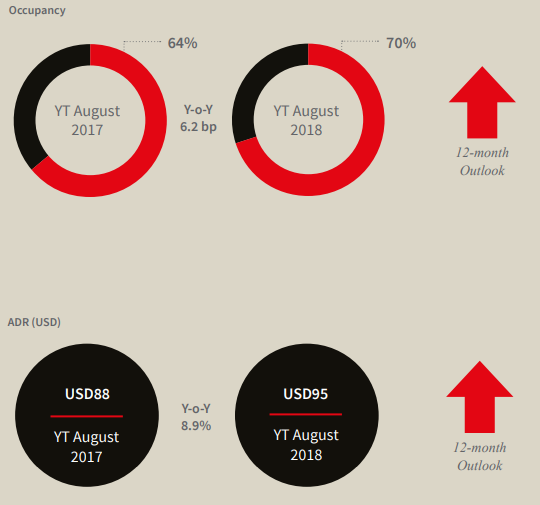 JLL’s Country Head in Egypt Ayman Sami says that such increases reflect a higher demand in the market and the huge efforts exerted by the government to attract more tourists, highlighting that the roadshows the country have organized abroad, the effective tourism campaigns launched, and the continuous initiatives were introduced to lure international universities to set foot into the country.

Speaking of the sector, Head of Hotels at Colliers International MENA Christopher Lund praises the efforts done by the government in this regard, highlighting the successful attempts to improve safety measures and get travel warnings removed from key source markets.

The effect of the unfavorable events on tourism is not as strong as before, Sami adds, arguing that the occupancy level still maintains its momentum in 2018. As for 2019, he expects the hospitality sector to continue leading the growth of the entire real estate market.