In order to sense if the housing market in any given year is ameliorating, you have to compare the country’s activity year over year, while taking into consideration some economic factors.

A country’s economy may significantly alter its real estate market and vice versa. In this regard, and since 2019 is nearly coming into focus, Invest-Gate provides an in-depth analysis of the distinct economic trends you must thoroughly scrutinize to know if any housing market is improving or not, particularly in Egypt.

The real estate sector is one of the dominant sectors in the Egyptian market and it plays a major role in the development of Egypt’s economy. This is reflective in the country’s residential segment’s resilience in the face of challenging broader economic conditions in recent years.

Inflation has taken its toll on Egypt’s economy in the past years as it hit a record high of 33% in July 2017, after the country floated its local currency in November 2016 under its economic reform plan, which helped it secure a USD 12 bn loan facility from the International Monetary Fund (IMF).

However, Egypt’s annual headline inflation rate declined in November 2018, logging the steepest fall in three and a half years that has reversed the upward trend and recorded 15.7%, the first decline since August when it soared steadily on the back of subsidy cuts as well as the biggest since June 2015.

The announced annual headline inflation rate came within the Central Bank of Egypt’s (CBE) inflation projection for the fourth quarter of 2018 – a 13% with a possible 3% change in either direction, the official statistics agency CAPMAS’ November 2018 results indicated.

“The ascending inflation rates, increasing prices of gas and raw materials, and the rise in the overall cost of living directly affect any product’s cost in general, and thus, impact the public’s purchasing power (i.e. affordability).”

“In a reaction to the market changes, property developers have figured the optimum way to resolve such matter, in order to keep the steady demand rates in the residential market, not only to provide villas and spacious apartments to affluent clients, but also to deliver smaller units on more flexible pricing strategies in favor of extending properties that are affordable to all classes.” 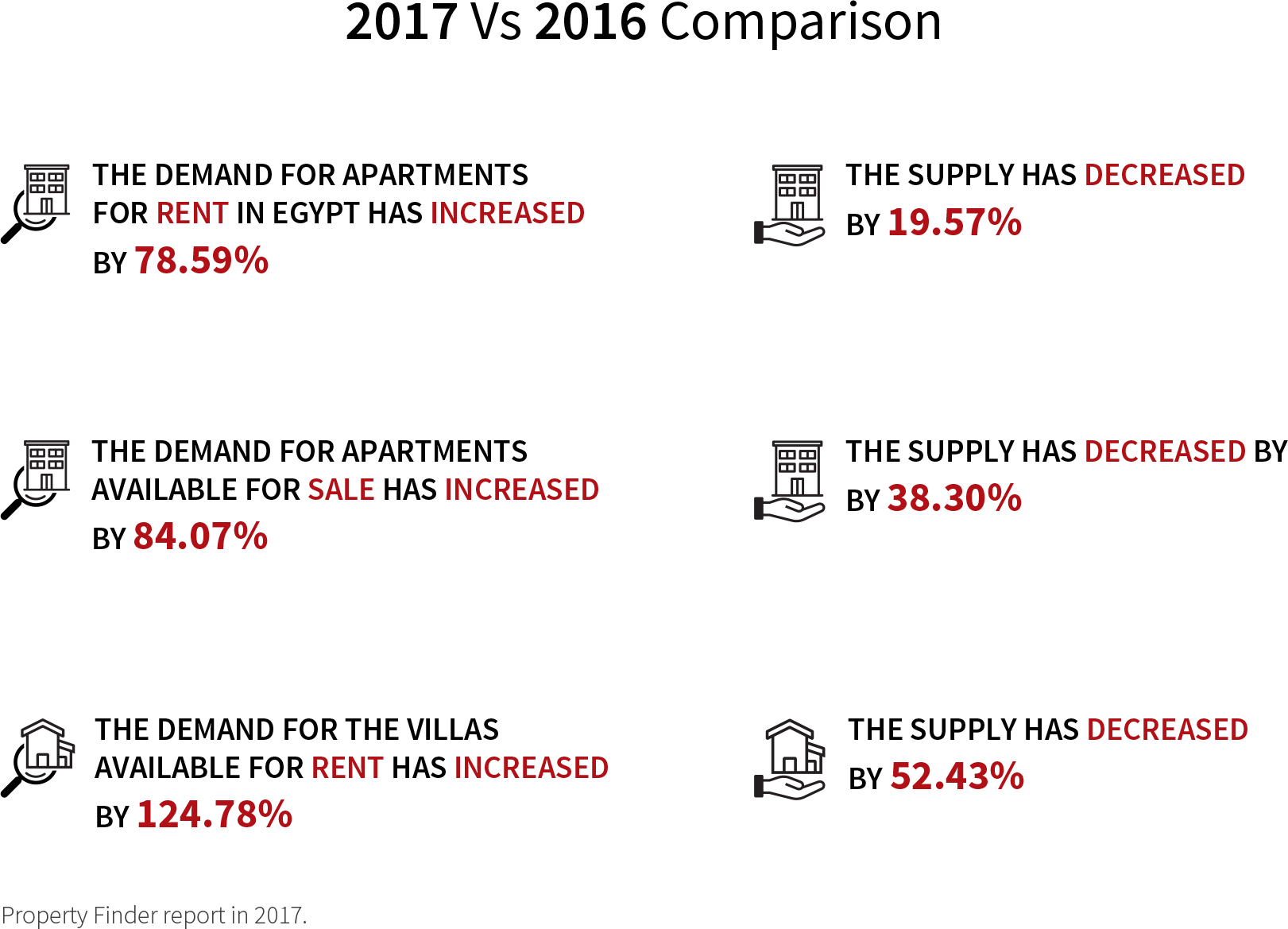 As in many of the world’s mega cities, demographics will remain a fundamental driver of housing demand. Egypt has a total population of nearly 104.3 mn – with more than 9.5 mn, or 10.1%, people living in Cairo only – and an annual growth rate of 30% from years 2006-2017, pursuant to the Central Agency for Public Mobilization and Statistics (CAPMAS) census for 2017.

“Despite the country’s economic and political instability due to the currency flotation, there is still a vibrant and strong demand currently prevailing across several sectors in the Egyptian real estate market due to the country’s steadily surging population, however, the high costs of lands and buildings in Egypt consequently affect the market’s affordability.”

“Although the Egyptian government has been exerting efforts to expand into the country’s suburbs in order to develop new cities that can accommodate the accelerating population growth to meet the rising demand for new residences, including New Mansoura and the New Administrative Capital (NAC) – which were mainly built in response to the soaring congestion in and around Greater Cairo, where the population is expected to jump to 40 mn citizens by 2050 – Egypt still encloses abundant tracts of unused land that must be exploited for the country’s welfare.”

In essence, housing matters to economic development; it can enhance a country’s economic performance and place competitiveness, but it can also result in segregation and spatial concentrations of poverty.

Glossop argues that housing development should be considered – alongside employment, transport, and business development – as a key component of economic planning.

As for Egypt, the real estate sector seems to be the backbone of the Egyptian economy, despite all political and economic setbacks, as the country’s real estate industry has consistently grown and contributed to 15% of the GDP in the first half of 2017 alone, according to B2B for Investment and Real Estate Marketing’s research and development department.

“The real estate industry constantly absorbs upwards of 15% of employment and continues to grow, expected to reach 20% by 2019 … The construction and development sectors currently make up 20% of the national GDP,” B2B’s research department adds.

Interest rates have a profound effect on the value of income-producing real estate, as on any investment vehicle, because their impact on a person’s ability to purchase residential properties – by increasing or decreasing the cost of mortgage capital – is so radical.

“Many people incorrectly assume that the only deciding factor in real estate valuation is the current mortgage rate. However, mortgage rates are only one interest-related factor influencing property values. This is because interest rates also influence capital flows, supply and demand for capital, and investors’ required rates of return on investment.”

“Interest rates can significantly affect the cost of financing and mortgage rates, which in turn affect property-level costs, and thus, influence values.”

Fawzy underlines that as interbank lending interest rates decline, the cost of funds is reduced and more funds flow into the system; conversely, when rates increase, the availability of funds drops. As for real estate, the changes in interbank lending rates either add or reduce the amount of capital available for investment.

To learn more about this topic, read pages no. 28-30 at our January issue.

Amidst Rising Inflation: Suggestions for Facilitation of Mortgage Finance Procedures to Avert Recession