Egypt: The Next Move To Foreign Homebuyers

Invest-Gate speaks to a number of foreign expats living in Egypt, exploring the reason behind choosing the country as well as obstacles facing foreign homebuyers. “I moved from the UK to Egypt specifically because it is the safest country across Africa,” Samantha Morgan-Lister, a 47-year old doctor, who rents properties in Egypt, says. Egypt’s new legislations on residency permits gives it the chance to compete with other European countries such as Greece, Portugal, and Spain, who have similar pleasant weather year-round. However, Egypt remains at an advantage due to its low housing prices as well as its low living costs.

Maryanne Stroud Gabbani, a Canadian expat, shares Morgan-Lister’s sentiments, adding that Egypt’s sunny weather was what attracted her to buy land in Egypt. “I moved to Egypt to enjoy the sunshine. My husband had been traveling between Toronto and Egypt for about seven years, and I got tired of shoveling the snow by myself,” 60- year old Gabbani, says.

Twenty-eight years ago, she moved to Alexandria with her husband. However, after he died back in 2000, she decided to skip the city’s hustle and bustle and buy a piece of land on a small farm near the pyramids of Abu Sir, south of Giza. Through both foreign homebuyers, Invest-Gate demonstrates some obstacles that hinder our real estate export. 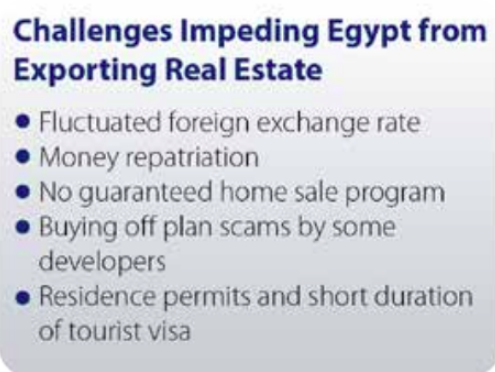 “The Egyptian government should work to improve infrastructure and provide basic amenities. Why would foreigners want to spend their life savings on properties if their basic needs will not be met? A cheap price does not attract the right buyer,” Morgan-Lister says.

However, Ahmed Zaalouk, sales director of Oriental Urban Development (OUD), claims that the main challenge impeding us “from acquiring a larger share of overseas real estate investments is improving our relations with countries exporting tourism to Egypt.”

“Egypt has a huge opportunity to have pensioners or those who are looking for cash cow (investments,) but there are some obstacles such as the visa issue,” Gabbani says, adding that she knows people, who have been in Egypt for ages and are yet to resolve their visa issues.

Visa permits stand as an obstacle amongst those interested in buying a second home in Egypt.

Gabbani notices that they tend to be demotivated to buy properties in Egypt as they are required to travel back and forth every three months to maintain the visa. On another note, Gabbani says the government should invest in the rural areas, which have potential for growth.

“Egypt would have all kind of foreigners coming due to its perfect climate and the incredible opportunities for fresh projects here, but it all has to do with some government mindsets that should be changed to cater for foreigners’ needs in terms of visa issues and residency law,” Gabbani says.

On another note, Gabbani says the government should invest in the rural areas, which have potential for growth.