As the autumn approaches so does the back-to-school season, Invest-Gate eyes real estate market players, from both public and private sectors, channeling their investments and resources to cater to the educational system as part of Egypt’s educational reform plan. Invest-Gate tours the recently established schools and universities across Egypt as well as the many to-be developed and explores how such projects are positively affecting not only the educational system but also the real estate sector.

“The new schools and academic facilities provide high-quality education for Egyptians, while simultaneously generating revenues for the Egyptian government,” Minister of Housing Mostafa Madbouly said in a recent statement on the development of new schools with improved curriculums. The government’s drive to construct more high-quality schools and universities also aims to accommodate the growing school-age population in the country. The school-age population is rapidly growing in Egypt, with projections of reaching 26 million by 2020.

With the reform plan set in motion, Housing Minister Madbouly announced the launch of ‘Tokkatsu’ educational system adopted from the Japanese model of “educating the whole child”. The new system will not simply focus on growing a child’s intellects, but will also seek to develop all other aspects of the child as his values, attitudes, and social skills.

According to Madbouly, the government will establish 55 new public schools in FY 2018-19 that follow the Tokkatsu model across many governorates, including Cairo, Sharqiya, Qalyubiyah, New Damietta, and Luxor, aiming at updating the country’s ailing education system within the next four years. 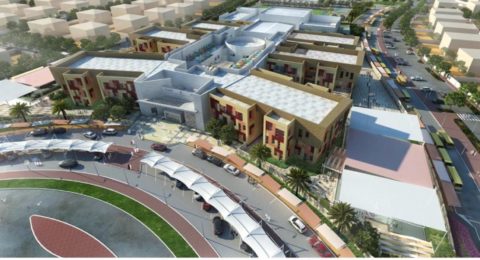 These new schools will be built in Upper Egypt’s Luxor districts of El-Tod, El-Awabed, El-Karnak, and El-Qarna, spanning over an area of 16,000 square meters; and will include a large complex hosting several schools for all educational stages.

Aside from the newly established Tokkatsu-modeled public schools, the Egyptian government will offer another advanced educational system through its ‘Nile Schools’ project, based on the British educational system. Students are to receive accredited high school degrees from the University of Cambridge. Teachers, too, are trained in cooperation with the University of Cambridge.

The Nile Schools model has been adopted in some schools across Egypt as of 2016 and will expand in new cities as well, Minister Madbouly confirms.

In close proximity to the New Administrative Capital, Egypt is currently developing 3,000 feddans to establish the New Knowledge City, which will “rely heavily on information technology in all its sectors, whether means of transportation or the design of the buildings,” an official at the Information Technology Industry Development Agency (ITIDA), which is contributing to the project, tells Invest-Gate.

The official, who spoke on condition of anonymity, as he is not authorized to speak to the press, adds that the city will depend on renewable energy sources like solar energy, as well as water treatment to irrigate its green spaces. New institutes and centers for technology training will be established in the New Knowledge City. “The government will try to attract international research companies and institutes specialized in the fields of engineering, sciences, and technology to have their headquarters in the new city,” he states.

Meanwhile in the Private Sector…

With the rising demand for private education in Egypt, many developers are focusing their investments on education projects, “boosting both the education and real estate sectors,” some experts conclude.

It is believed that private education offers a wide range of investment opportunities for real estate industry players seeking to diversify their portfolios and increase their exposure to alternative sectors. The rise in educational institutions, such as private schools, comes in line with the government’s plan to raise educational standards, provide comfort to real estate stakeholders and, above all, increase financial returns.

Sabbour Consulting Company is among the main players in this field, providing consultancy services for a number of projects such as the first and second phases of the National Bank of Egypt-funded project concerned with developing, renovating, and upgrading government schools in the working class district of El-Sabteya, according to Maha El-Salhy, Head of Business Development at Sabbour Consulting.

The project aims to improve the quality of public schools. “We, as a consultancy firm, have another project with the Federation of Egyptian Banks to develop existing schools in Helwan. Most of these schools suffer serious problems, so the federation decided to buy a five-feddan, on which a complex of schools will be built in cooperation with Helwan’s Egyptian Directorate, with the whole project funded by the federation,” El-Salhy adds.

Sabbour is also scheduled to upgrade a number of schools and build new ones with an international system across different villages in Upper Egypt’s Assiut, aiming at improving the quality of education and providing a better environment for students. “We face a lot of challenges in this project as some schools are rickety, in addition to their poor infrastructure,” El-Salhy notes.

“We won a consultancy tender for the Arab Open University in Egypt, and then were awarded another deal for its other branch in Bahrain. The company also finalized the designing phase of High Nile Institute and Heliopolis University, but they are not yet implemented,” El-Salhy says.

“There is a dire need for schools in Egypt and the government is currently focusing on developing public schools and universities,” Founder Hussein Sabbour says, adding that the New Administrative Capital will encompass a number of universities, and that the company is competing to win a deal to design one of these universities.

In the belief that education is one the best investments that can be made today to address some of tomorrow’s biggest challenges, Tatweer Misr made it one of the main pillars of its community investment.

“The company is currently negotiating partnerships with a number of international universities to establish a unique university that focuses on graduating the next generation of entrepreneurs,” Tatweer Misr Board Member and Managing Director Ahmed Shalaby says.

It will be the first university in Egypt to provide top-notch education focused on innovation, entrepreneurship, and small –to- medium enterprise (SME) development to help create a nation of entrepreneurs, who will form the backbone of SMEs in the future.

“Developers need to put into consideration the economic and social needs of the neighborhoods they develop, thus incorporating design elements that contribute to environmental health as well as architectural aesthetics. With this in mind, we are aiming to create what is known as a college town, which combines living and retail spaces,” Shalaby adds.

Shalaby reveals that entrepreneurs and investors are always trying to bring new perspectives and innovative solutions to the education sector by entering into partnerships with learning institutions that demonstrate strong growth prospects with best practices. “Such partnerships are not limited to funding but also include provision of advisory services and technical assistance that can strengthen the institution’s creditworthiness. This is the case for Tatweer Misr, which sought out a number of high-level universities and is currently in talks to bring new solutions to Egypt,” Shalaby notes.

El-Gouna is also home to education projects owned by Samih Sawiris and Orascom Development Egypt like El-Gouna International School, in addition to Technische Universität Berlin (TUB) Campus El-Gouna, which is a unique public-private partnership (PPP) project in the field of education export.

New Giza For Real Estate and Development is another developer that introduced a number of education projects at its New Giza Compound, encompassing El-Alsson British and American International School, spanning an area of more than 54,600 square meters, according to the company’s website. The directors are committed to school improvement and providing high-quality, broad, and balanced education. Le Lycée Voltaire du Caire is also one of its projects, comprising purpose-based buildings and educational facilities that comply with international standards.

Covering an area of almost 210,500 square meters, New Giza University is the developer’s latest project in partnership with University College London. The university will be a hub for sciences, engineering, business, and medical knowledge, according to the university’s website.

Talaat Moustafa Group developed a number of projects like the British School in Al-Rehab City, with more projects in the pipeline in his community complexes, a master plan published by the company showed.

Egypt’s construction and real estate sectors are being buoyed by a national drive to build new schools, universities, and institutes with high-quality curricula, a drive that is helping improve the country’s educational system. The Egyptian government and the country’s real estate developers are capitalizing on a comprehensive education reform plan that seeks to provide high-quality education for Egyptians, engage the private sector in the process, and help developers diversify their portfolios and increase their exposure to alternative sectors.