Featured This Month The Real Deal

For quite some time, infrastructure and public economic growth have been entwined reflecting the magnanimity of infrastructure projects on the real estate market in Egypt to a great extent.

In the grand scheme of things, infrastructure is as vital as the commercial aspect to building new recreational and residential units, which became clear and necessary to consider while approaching any new project.

The creation of a tourism destination requires appropriate and reliable infrastructure.  Developers need adequate resources to build hotels, restaurants, and other facilities.  Tourists need airports to visit from faraway locations.  They need roads to access hotels and sightsee.  Most tourists want to visit places that offer basic services such as water, sewage, electricity, health facilities, and telecommunications.

Egypt’s tourism industry has witnessed ups and downs, particularly over the past decade, but the industry is now poised for growth, especially with a focus on improving infrastructure.  One avowed example can be found in the coastal area of Ain Sokhna, with its many prospective development projects. In Ain Sokhna, upgraded infrastructure is viewed as a major leap forward that will attract further investment to the area and speed the development process.

In line with the Ministry of Tourism’s policy to boost the tourism industry in Egypt and increase investment in the sector, a number of infrastructure projects have been planned and inaugurated in coastal Egypt., These projects indicate the necessity of infrastructure development as a catalyst for economic growth.

The most recent three infrastructure projects are in Ras Sudr, the North West Coast, and Ain Sokhna.

Invest Gate sat down with the Vice President of the Tourism Investors Authority (TIA) in Ain Sokhna, Mohamed Roshdy, to discuss how upcoming projects will shape the Ain Sokhna market for both developers and buyers.

When asked about Ain Sokhna as a nascent attraction for investment, Roshdy said, “The developer carefully chooses his location, and Ain Sokhna is what we call ‘the Cairo beach,’ due to the fact that it is 100 km away from Cairo and 40 km from the new Cairo administrative capital.”

“Ain Sokhna has got all the advantages a touristic area needs for foreign and domestic tourism, especially that it is so close to Cairo, while having the same beautiful weather as Hurghada, near a stunning sea,” Roshdy continued. 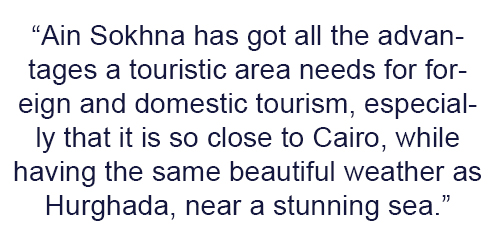 According to Roshdy, what Ain Sokhna mainly lacked was the infrastructure; the Tourism Development Authority (TDA) was partly established to meet this need. Since 1991, the authority has employed experts with a vision to help private-sector investors support development of the tourism industry; especially since the state allocates a piece of land to be employed and built from the infrastructure to the residential and commercial real estates.

The Progress Is Qualitative

“What is taking place in Ain Sokhna is a qualitative move, as a result of the new road being built by the Armed Forces, which extends to Galala Mountain,” Roshdy noted, adding that these roads will allow Ain Sokhna to host hospitals, schools, and an airport. These projects will help attract international tourists. 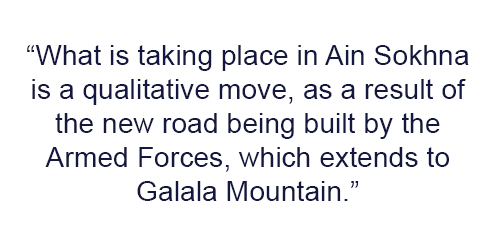 Another upside to labeling Ain Sokhna as a tourist attraction is the city’s proximity to Cairo, which will allow for a quick visit to the Pyramids and the Egyptian Museum, as well as Coptic and Islamic Cairo, argued Roshdy.

“In no time, you will have a place for domestic and international tourism alike, considering it is as safe as any other part of Egypt. A progress that the state and the private sector should cooperate to achieve,” he stated.

Roshdy noted that some of the challenges facing developers include obtaining environmental permits, sewage issues, electricity problems, road accidents, and providing water, especially because it depends on seawater desalination.

Another issue facing developers in the region are regulations designed to attract international tourism; namely, the 1:1 hotel regulation; which entails that for every 100 touristic unit (villa, chalet, etc) 100 hotel rooms need to be built.

When asked about the effect of increases in land prices, Roshdy replied, “The infrastructure projects that took place around Ain Sokhna, have largely attracted investors to the city; thus, leading to the rise of land prices by the state itself through setting up auctions to obtain the highest prices and benefit from the heightened demand.”  He added, “In my opinion, if the state keeps playing the land merchant here, there will never be real development.”

When asked about the tangible impact of recent infrastructure plans on sales, Roshdy said that sales have surged by 30 to 40%, and even higher numbers are expected. “When President Abdel Fattah Al Sisi came to power, he started a number of major national projects, such as the Galala mountain expansion,” he explained, adding that vast roads are being dug through the mountains at 800 meters above sea level. Other roads are under construction to connect Cairo and the deep south of Egypt. “There is an inclination to enhance and build new roads, which in no time, will turn Ain Sokhna into another Hurghada,” Roshdy remarked.

“Attracting people to these projects and vacant hotel rooms require good roads, an airport, hospitals, a comprehensive city, etc.,” he elaborated.  “Previously, we never had that, and even hospitals were established by investors themselves.”

The Government’s Much Needed Role 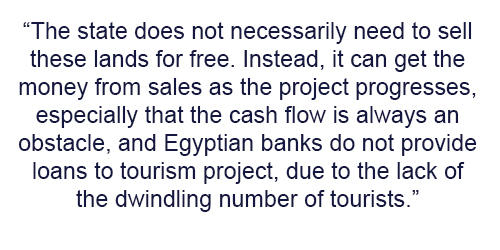 In regards to the efforts required by the government, Roshdy said that certain standards should be set.  He argues that companies or developers should be granted lands, provided that these lands serve a purpose, instead of giving  lands for gratis.  This point coincides with an April 2016 decree, no.158/2016, issued by President El Sisi, that grants state-owned lands for free to investors.

“The state does not necessarily need to sell these lands for free,” said Roshdy “Instead, it can get the money from sales as the project progresses, especially that the cash flow is always an obstacle, and Egyptian banks do not provide loans to tourism project, due to the lack of the dwindling number of tourists.” He added that hotels start getting the ROI in no less than 8-10 years.

Roshdy also highlighted the fact that some investors acquire pieces of land in Ain Sokhna, then freeze them as assets for personal gain. “We need a regulation that sets standards for firms that are in it to conduct business. Companies that present poor performance should be banned or punished in a way,” he asserted. The other options for the state to partner  in such projects, he added.

“We also need to have a unified extension when it comes to beaches, which is set to be 200 meters and on the long run, this does not work, especially that this could work at some areas and not work in other ones – some will end up with no land to build on,” he explained “Such conflict in regulations needs to be rectified and addressed accordingly.” 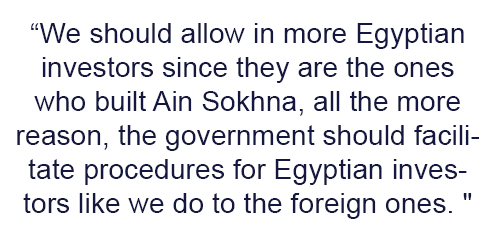 Another aspect Roshdy referred to was the environment. “The Ministry of Environment needs to amend certain laws that will help investors while preserving natural resources,” he argued “What is being performed in Ain Sokhna is desalinating water from one salty or brackish well and dispose the sediments in another, which is hardly economic, especially that when you drain the waste back in the seawater, you kill marine creatures,” Roshdy continued. “As we speak, there is a high-tech procedure that can drain that in distant places in the sea, not to leave a huge impact on the marine life.”

So far, most investors in Ain Sokhna are Egyptian, while foreign investors can be seen clearly within the hotels sector. The purchasing power of the pound definitely causes prices to go up. “Such rise is not but an indicator that we need to work harder and faster,” Roshdy asserted.

According to Roshdy, the TDA offers installments of up to seven years to pay for allocated lands, which is a step forward in supporting development. “Let’s not forget that the developer is the last one to get his return on investment, while the buyer is the first one to benefit from this since he has a direct way of profiting from a real estate,” he said.

When asked about the State’s plan to expand Ain Sokhna, Roshdy said it correlates with the development of the touristic city. In regards to the allocated or offered lands there, he said there are no more lands to allocate. The TDA has withdrawn the remaining available areas to put up for sale at auctions.

Roshdy remarked that Ain Sokhna has to be, at least in part, residential, especially due to the weather and necessary amenities. The Armed Forces are building hospitals and schools, as well as the large El Galala city project. It can be a new Alexandria, hence the need to educate people on how to invest in the area.

Ain Sokhna already has banks, malls, and supermarkets, but this is not enough. The education and health sectors need to be involved, Roshdy stated. “It definitely is a hotspot for commercial real estate units to be built.”

Attracting people to these projects, and to vacant hotel rooms, require good roads, an airport, hospitals, and a comprehensive city, according to Roshdy, whose attitude reaffirms the role of the TIA’s 30 registered developers.

In the end, Roshdy emphasized the importance of infrastructure projects and the buyer’s choice of developers. “A buyer needs to authenticate the project either through the TDA or the TIA. The buyer should also compare the services, security, landscapes and safety infrastructure-wise.”

The city of Ain Sokhna is one of a few prospects in Egypt that can serve as a residential complex and a recreational retreat, with the added bonus of being close to the capital. Additionally, infrastructure projects have provided a major uplift to the area, which further enhance the quality of life and offer multiple options to both buyers and developers alike. While it seems like a golden ticket for developers, infrastructure is but one crucial step towards the larger scheme of making Ain Sokhna a prime residential and touristic destination.