Tourism and leisure facilities have always been known to have a profound impact on the value of surrounding properties and the type of clientele they attract, among many other features.

Contrary to traditional housing projects, tourism real estate emerged as a concept that is characterized by the development of large-scale tourism resources along with residential or vacation properties.

In recent years, this touristic, leisure, and real estate mixture has turned heads across both private and public sectors. Currently, both the government and private developers aim to integrate tourism and leisure resources, such as resorts, hotels, airports, sports and entertainment facilities, when developing a city or residential project to transform it to a fully integrated one. Amer Group, for example, was one of the very first developers, who applied this concept on its projects and considered adding the entertainment value, such as retail and commercial spaces and hotels, to their projects, thus providing “the complete solution.”

In this regard, Invest-Gate highlights the many benefits of establishing tourism resources as well as exploring the successful models and future projects to follow suit.

The Many Benefits Of Tourism Resources

The existence of tourism and leisure elements in any city or project adds various competitive advantages, starting from the quality of place and lifestyle they create to the impact on the price of the whole project.

“Tourism resources create a unique lifestyle, making any surrounding residential or vacation properties much more attractive and easier to sell,” according to Mohamed Abdellatif, Managing Director at City Edge Developments.

Christopher Lund, Head of Hotels at Colliers International MENA, attributes this attractiveness to the fact that “adding hospitality and leisure facilities -especially those with a brand- generally brings credibility to any development and increases the client’s trust.” 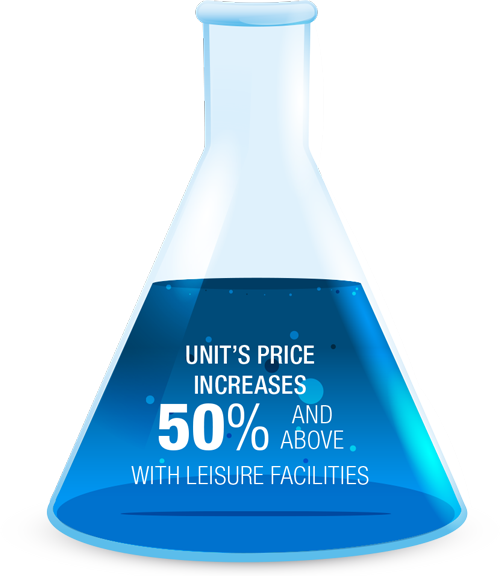 Moreover, the opening of any new tourism project raises the surrounding properties by a big percentage. Abdellatif notes, for example, that the prices of houses in front of the Egyptian Media Production City in the 6th of October City hiked after the Mall of Egypt opened back in 2017. “A similar example is the units located in El Teseen Road, New Cairo, which increased in value after the opening of Cairo Festival City (CFC) in 2015,” confirms Abdellatif.

The units’ prices in both examples hiked and were very close to doubling, Abdellatif says, adding that it is even more than 50% in other cases.

However, the percentage cannot be determined in general as it differs from one residential project to another based on variable factors, including its location and type. Abdellatif adds that the brand and scale of the tourism or leisure project surrounding the properties affect their rising value, questioning “Is it Mall of Egypt, CFC, or any local shopping mall?”

For many developers, tourism resources have become an important factor to create an integrated residential project. Lund notes that tourism resources provide tangible value to any project, where essential services of lodging, leisure, and entertainment are offered. Further to that, “such resources also improve the branding of the real estate project as well as diversifying its returns,” says Lund.

Nowadays, all people look more for a mixed-use project rather than being only residential so the tourism facilities are a big part of the formula of any project today. “It is not anymore more about housing, but about the life developers create in any project. “Work, live, and play has become the slogan that any customer wants to hear,” Abdellatif adds.

Commenting on the advantages of this concept for the country’s economy, Lund notes “Collectively, tourism resources provide economic benefits from the income they derive as well as important social benefits such as employment, while also improving the status and profile of a destination.” He adds, “this is clearly demonstrated in the vast array of destinations (Cairo, North Coast, Red Sea, Ain Sokhna, and South Sinai) in Egypt, where existing and planned tourism resources are potential, driving these contributions directly and indirectly.”

The New Map Of Egypt

Some of the most popular real estate developments in Egypt’s resort destinations, such as El Gouna, Soma Bay, and Sahl Hasheesh, are anchored by the tourism resources of hotels, resorts, and entertainment offerings.

This concept is currently being applied to many private and public projects in the pipeline when it comes to coastal or main cities across Egypt, especially the new ones, as well as other smaller integrated projects.

A top mega project is the New Administrative Capital –spanning across 700 square kilometers and expected to accommodate almost 7 mn people, which is set to include residential districts alongside with artificial lakes, a major theme park, an electric railway link with Cairo, and a new international airport, and other facilities, according to an official statement.

“Kilometers of avenues and streets, 40,000 hotel rooms, and retail malls with upscale amenities and facilities are all to be part of the Administrative Capital,” Lund notes.

More examples of this can be seen in the various existing and planned developments in Ain Sokhna, which is extremely popular with the domestic market.

Located between Ain Sokhna and Zaafarana on the Red Sea, Galala City is set to be a comprehensive and unique project that integrates all the tourism elements; it will comprise a resort, hotels, villas, chalets, water parks, leisure, and commercial activities.

The project’s plan includes a tourist resort across 1,000 acres (increasable in future), to overlook the Gulf of Suez. It also includes two hotels; the first is built on Galala Mountain and consists of 300 rooms and 40 chalets, while the other is a coastal hotel consisting of 300 rooms and 60 chalets, as well as a marina, according to an official statement.

Galala Mountain also has a planned city rising 700 meters above sea level and stretching over 17,000 acres. It is expected to include an Olympic village, where sports events will take place, tourist and low-income residential areas, among other services.

Another prime example in North Coast areas is the New Alamein City, which will feature “16 hotels, sports clubs, a cinema complex, theaters, a scientific research center, a yacht harbor, a business center, residential projects, and resorts,” according to Lund.

Leisure, entertainment, and hospitality facilities are major buying endorsers, changing the formula and type of buyers, Abdellatif notes, adding “New Alamein has become very attractive for any buyer to live all-year-round with all facilities nearby.”

As for the prices, the city’s integrated plan contributes to raising the value of properties there. “With the appearance of our towers, the North Edge Towers, in New Alamein, all properties around are expected to rise more in value, especially the compounds overlooking the towers,” Abdellatif says.

On a wider scale, Abdellatif notices the rise of property sales in the North Coast this year is due to the increase in entertainment factors growing there. “This year saw the most influx of interested foreign buyers to come due to nightlife activities,” he elaborates.

Moving to Delta on the Mediterranean Sea, there is a big plan for New Mansoura City in progress to have an integrated formula. The city spans across 5,913 acres, with a 15-kilometer beachfront, comprising luxurious tourist housing areas, in addition to middle-class residential area, as well as hotels to serve medical tourism visitors.

“The city will present a new form of life and new concept to Delta citizens, with expectations to attract different classes and types of tourists whether local or international,” Abdellatif comments.

Sheikh Zayed is one of the cities that is expected to completely differ soon in terms of units’ prices and types, and the number of facilities offered. “The near opening of the Sphinx International Airport and establishment of the 32,000-acre New Sphinx City will change the whole area of Sheikh Zayed,” CED’s Managing Director notes.

Aiming to serve tourists who want to visit the Grand Egyptian Museum (GEM) and the Great Pyramids of Giza, the airport is expected to lure both investors, and foreign or local homebuyers to invest in the surrounding areas.

Abdellatif reveals “CED is already carrying out a commercial complex project, which will be the new soul of Sheikh Zayed, with a plan to include all types of leisure such as retail, commercial, and a hotel.”

Last but not least, Marsa Matrouh has a number of tourist projects in progress. Governor Alaa Abu Zeid has signed agreements for a number of investment tourism projects in the city early this year, aiming to create a city to enjoy living in. One of the agreements stipulates the establishment of “an integrated entertainment city, similar to Disneyland, across 5,080 acres with total investments of EGP 58.24 bn,” according to a statement by the Ministry of Investment and International Cooperation.

The entertainment city, which is a joint Saudi-US investment, will include a zoo, waterpark, medical center, and hotels. The project is predicted to take nine to ten years before being fully operational.

The governor also inked a deal with a UAE real estate and tourism investment company to carry out a 172-acre touristic project valued at EGP 1.2 bn, comprising a number of hotels, malls, and tourist apartments and villas.

To sum it all up, the government and private sector are going hand in hand to change the map of Egypt through introducing an integrated end product -complying with international standards- that appeals not only to the local taste but also the global one. Integrating tourism, leisure, and real estate all in one project has become the recent trend that is proven successful and attractive both for the buyer and developer -whether from the private or public sector, given the many benefits of such mixture.