Sahel vs. Sokhna: Where to Buy?

Owning a vacation property is a huge draw for some, allowing a person to acquire their very own small slice of paradise and enjoy it at your leisure without the hassle of renting. It also means enjoying serene, picturesque settings, clean air, away from the congestion of the city. Two avowed examples of Egypt’s vacation spots are Ain Sokhna and the North Coast.

With its pristine shores along the Red Sea and remarkable proximity to Cairo, Ain Sokhna has become a favorite weekend getaway for Cairenes looking for a short and relaxing time on the beach.  For international tourists, it is a brief one-day retreat to those who view blue tourism of less importance as sightseeing and monuments sightseeing in Egypt.

Stretching over the ebony coastline of the Mediterranean Sea, the North Coast (Sahel) boasts beautiful and upscale resorts, where vacationers spend their summer months. The North Coast has become a haven where city dwellers flock to gain respite from the noisiness and stickiness of the city. Although the area is favored by many, the demand is only during the fleeting summer months, as the winter proves too cold for Egyptians to weather.

Both Ain Sokhna and North Coast are popular travel destinations for many Egyptians looking to escape the heat and congestion of the city and to enjoy frolicking on the shores of Mediterranean and the Red Sea. There is a myriad of well-established tourist hotspots that cater to a variety of modern tourist requirements with stunning natural scenery.

As the overwhelming majority of Egyptians can only afford to buy one vacation property; the question then becomes where to buy: Ain Sokhna or the North Coast? The decision is not necessarily a purely financial one, although it is a pivotal part of the equation. There are more intangible factors that come into play. For example, how much time can one spare from work? Investment-like questions come into play as well such as can it be rented, its resale value, the appeal of the surrounding community, and most importantly the suitability of the vacation property with the desired lifestyle.

Ain Sokhna’s proximity and ease of access to Cairenes are the primary advantages of the city. It lies around 120 kilometers East of Cairo,  approximately an hour of driving, a perfect quick escape from the city. Moreover, the weather in Sokhna is sunny year-round,  allowing vacationers ample opportunity to visit at any time of year.

The seasonality of the vacation home varies from one person’s circumstances to the other. A young couple with kids might benefit more from a three month vacation summer vacation in the North Coast, where the schools are out. Sokhna, on the other hand, might be too cumbersome for a family with young kids for a weekend vacation, with the short stay not worth the hassle. The opposite holds true as well. A single, working millennial might enjoy the frequent close-by getaways, rather than a lengthy summer vacation. 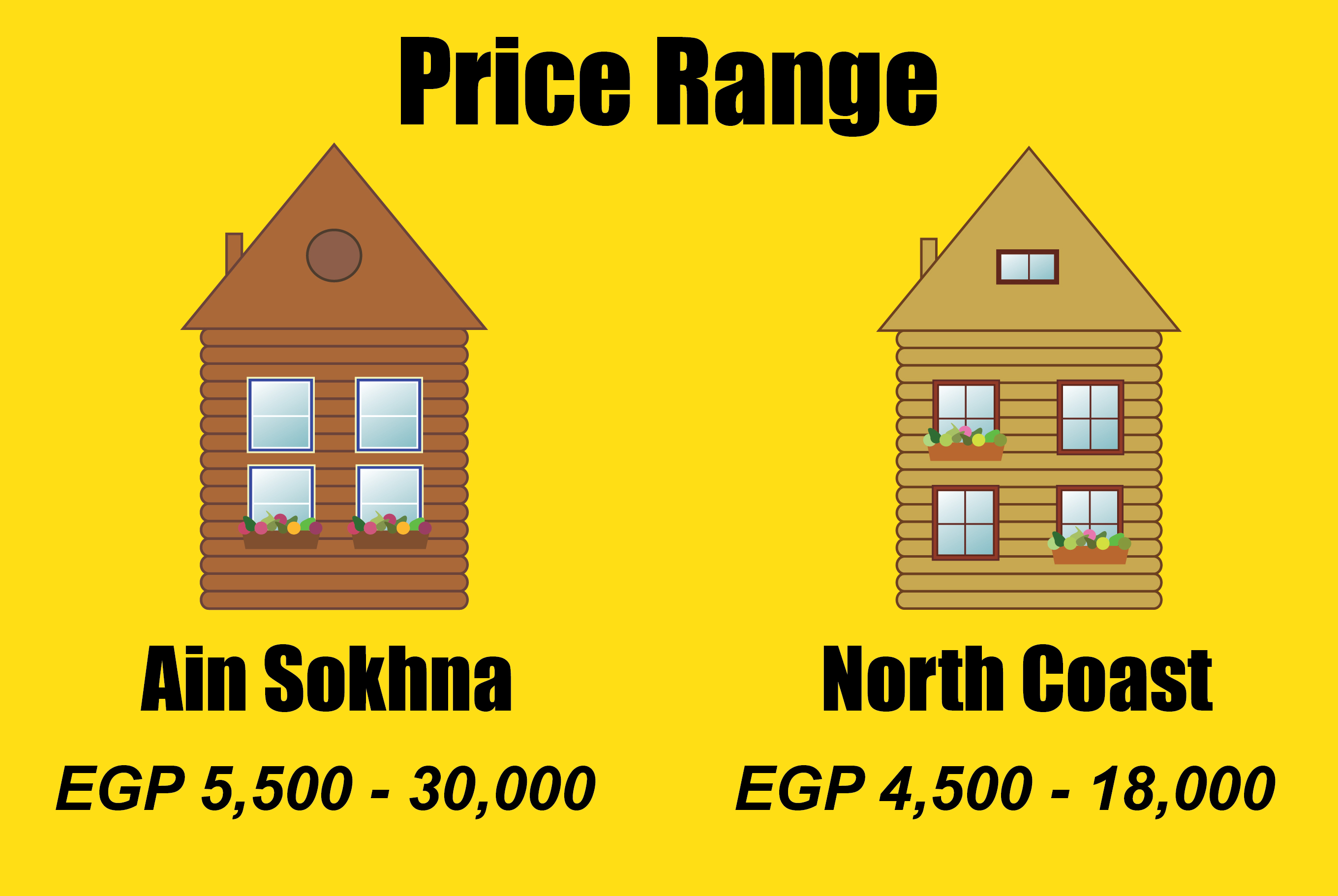 North Coast has for more than a decade been a popular destination for Egyptian vacationers in the long summer months. Depending on Developer and location, prices in North Coast can range between 5,500 up to EGP 29,200 per square meter based on a recent market study by Al Borsa.

Several aspects determine the unit price including the apartment’s design, surrounding services and amenities, entertainment centers, and location. All of these elements contribute to the increase or decrease of current market value.

Real estate prices, in general, have spiked due to inflation and the devaluation of the pound against the dollar. The pound’s depreciation has proven to be a catalyst for real estate sales, with more people turning their cash into assets, further driving the demand, and hence property prices.

Dubbed the Cairo Beach, Ain Sokhna is 120 kilometers away from Cairo and will be 40 kilometers from the Administrative Capital. It is accessible via the Ain Sokhna road built by the Armed Forces which extends all the way to Galala Mountain.

The government has launched the New Administrative Capital project’s announcement various infrastructure initiatives to connect Cairo to the New Capital, which will consequently ease future transportation to Ain Sokhna.

With the New Alamein City development currently ongoing, part of the mega North West Coast project, the state, as well as developers, are investing in infrastructure and roads for the new city. Work is currently underway from the 93 kilometer point on the Alexandria-Matrouh Road up to the intersection with Wadi Natrun-El Alamein Road. The new road, named Al Fouka road, connects Cairo to Alamein City. The new road will shorten the distance from Juhayna Square in 6th of October City to Al Fouka district in Alamein City, totaling in length 467 kilometers.

Besides distance, both the North Coast and Ain Sokhna are relatively easily accessible, with the promise of enhancing infrastructure and accessibility even further as nearby cities continue to flourish.

Ain Sokhna has a wide variety of restaurants, cafes, and even shopping malls to explore.  There is the Meeting Point Porto Sokhna and Sky Mall.  While there are a variety of restaurants to enjoy, the selection is limited if compared to Cairo or even North Coast but that is likely to change as time moves forward and more investors set up shop in Sokhna. For golfers, there is a golf course at Sokhna Golf Club.

Many choose to purchase a vacation home and rent it while not being in used. Both owners are successful in renting their chalets in Ain Sokhna and North Coast. In North Coast, chalets can be rented out per day at a much higher value then Ain Sokhna. Property Finder rental listings for North Coast start at EGP 1,000 per night and climbs to EGP 8,000 for a high-end villa.

Ain Sokhna rental prices, on the otherhand, are lower in comparison, starting at around EGP 1,200 per day in a high season and EGP 500 to EGP 600 in the daily rates. Current Property Finder listings boast rentals of chalets at EGP 450 up to EGP 2,000 for fully furnished high-end villas.

It is however important to highlight that rentals in the North Coast area are only seasonal and limited to the summer months only, whereas Ain Sokhna can, in theory, be rented out year-round yet the practice is not all that common.

In general, rentals in North Coast are much more accessible and financially rewarding than that of Sokhna, despite the short duration.

If the intent is to rent out the vacation property, then the North Coast yields better returns. Ain Sokhna rentals are perceived as an unpopular option, and the daily rate is significantly lower than the North Coast.

Property prices in Egypt in general are climbing yearly, with no signs of slowing down. Partly due to inflation, but mostly due to growing demand fostered by both devaluation of the currency and population growth. All these factors have rendered real estate investment a sound venture, ensuring that the resale value of any property purchase will turn a profit for the owner.

Other than the organically increasing price levels, growth of nearby areas further boost price levels. For both Ain Sokhna and the North Coast mega projects are on the horizon ensuring a significant price boost of properties.

On the North West Coast, close to Marsa Matrouh,  a new city is being planned, the New Alamein City which is part of the Northwest Coast Development Project,  a mega project planned by the government. The project’s completion date is 2052 and could potentially provide 11 million job opportunities.

The New Administrative Capital, an EGP 400 billion city, located 45 kilometers from Cairo, will host ministries, hotels, and residential buildings and is expected to house EGP 5 million people.  The New Capital will be 40 kilometers away from Ain Sokhna.

Additionally, an Egyptian-Chinese Industrial Zone will be built in Ain Sokhna, with an EGP 45 billion investment, and is expected to host five key industries, namely, silos, equipment, petroleum products, non-woven textiles and complementary industries. The zone is expected to provide 20,000 to 30,000 jobs opportunities.

Once the new industrial zone in Sokhna and the New Administrative Capital in the works, the resale value of Sokhna property will most likely surge. Both these projects are expected to be operational sooner than the Northwest Coast Development, and hence the resale value for Sokhna properties are likely to climb much faster than that of the North Coast. If the vacation purchase is for short term investment purposes, Ain Sokhna is the way to go.

Finally, for Egyptians, a holiday on the beach with family is a cultural ritual enjoyed by all, and it is unlikely that demand for Ain Sokhna or North Coast to wane anytime soon. Whether it is for leisure or for an income boost, the decision to purchase a property alongside one of the country’s mesmerizing beaches is similar to acquiring one’s own piece of heaven.