Egypt’s official tourism website describes the Mediterranean city of Alamein as the “key to Egypt.”  This Mediterranean city, located halfway between Alexandria and Marsa Matrouh, is famous for witnessing several World War II battles.  The Egyptian government has targeted the country’s north west coast for development and New Alamein, a multi-billion pound eco-city designed to boost the country’s economy,  will be an important part of that long-term goal.  With initial construction underway on New Alamein, a more apt name may soon be “key to Egypt’s future.”

New Alamein, to be built at an estimated initial cost of EGP 2 billion, is one of multiple new urban centers that the government has planned to accommodate a booming population, curb unemployment, and help the economy.

Former Prime Minister, Ibrahim Mahlab, announced the establishment of New Alamein at a press conference in August 2014.  He stated, “…the new city falls under the ‘fourth generation of new cities’ meaning that the infrastructure will be eco-oriented, aiming at sustainable development, exploring water desalination and other renewable energy methods,” according to Cairo Post.

The Ministry of Housing aims to complete the first phase of construction by 2020.  This initial phase will be completed on an area of 41,000 acres.  An additional 8,000 acres will be set aside for an International Tourism Zone.  A further 13 kilometers along the shoreline will be designated for public beaches.  The city will feature housing for all income levels.

A general plan for the new city is in the works.  In October of last year, Minister of Housing, Utilities and Urban Communities, Moustafa Madbouly, announced that the project was underway with road network surveys and designs.  The Arab Contractors Company was working to prep road network sites. 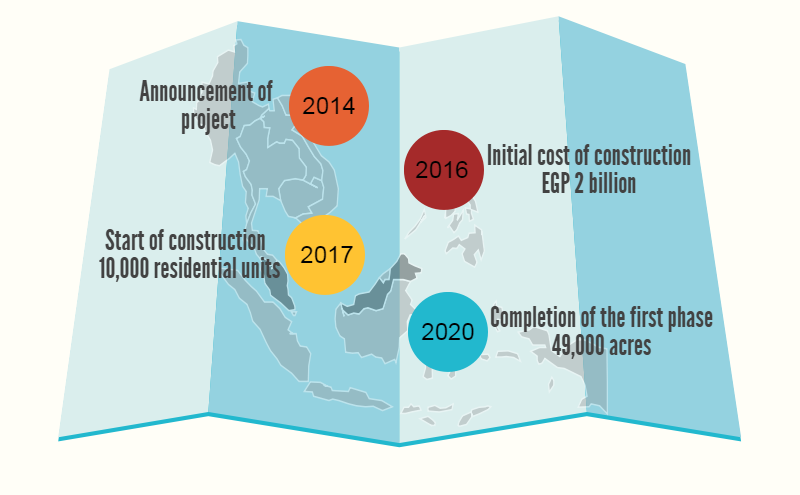 The first phase of infrastructure and facilities construction should be completed in two years at an estimated cost of EGP 1.5 billion, according to Daily News Egypt.

Foreign investors are pursuing a stake in the new city project, which would also provide a boost to the Egyptian economy.  A French delegation that met with Madbouly in mid-April expressed interest in investment opportunities in multiple Egyptian projects, including New Alamein.  Representatives of UAE’s Abu Dhabi Investment Authority have also shown interest in investment in New Alamein housing projects.

A New Kind of Egyptian City

New Alamein is one of several “eco-cities” the Egyptian government is working towards building.  An eco-city aims to implement “a wide range of environmental, social, and institutional policies that are directed to managing urban spaces to achieve sustainability,” according to Hosam K. El Ghorab and Heidi A. Shalaby, who wrote about eco-cities in a February 2016 article in the Alexandria Engineering Journal.  An eco-city also provides an adequate living standard without depleting the surrounding ecosystem.

The Egyptian government expects New Alamein to rely on renewable resources.  Plans for the city include a desalinization plant, solar energy, and other renewable sources.  A shift towards an eco-friendly model of city building could help mitigate Egypt’s long-term issues with water shortages and the ongoing energy crisis.

The construction of New Alamein is part of the Northwest Coast Development Project, a large-scale government plan to generate economic growth, improve social and living conditions for local communities, increase infrastructure, and provide housing and job opportunities for millions of Egyptians.  The Egyptian government inaugurated this project in 2014.  The Northwest Coast Development Project could provide roughly 11 million job opportunities by the project’s expected completion in 2052.

To achieve these lofty goals, the Egyptian government aims to establish internationally renowned tourism centers, industry, agriculture, and urban communities in the northwest coast region, which extends 500 kilometers from El Alamein to Salloum.  With acres of available land, including grazing land; resources such as dolomite, limestone, natural gas, and crude oil; and multiple tourist attractions, such as beaches, monuments, and monasteries, the northwest coast is a prime spot for economic development.

Improving infrastructure in the region will also play an important role in building up the northwest coast.  Roads are needed to improve access to the region and through the National Roads project, the Egyptian government has begun renovating roads in the north coast region.  The 135 kilometer Wadi Al Natrun-Alamein road that connects Wadi Al Natrun area in Beheira governorate to Alamein was recently renovated at a cost of EGP 1.9 billion, and included upgrades, toll gates, and the addition of a third lane.  The renovations were partly undertaken to encourage tourism between Cairo and the northern coast, said Transportation Ministry spokesperson Ayman al-Sheraie in 2015, according to Nile Net. 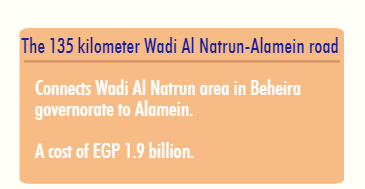 Egypt has big plans for developing clean energy options on the northwest coast. In late May 2016 the Egyptian government received an EGP 222 billion ($25 billion) loan to finance construction of a nuclear power station in Dabaa, located west of Alexandria.  The loan will cover 85% of construction, while the Egyptian government will provide the rest of the funding.  The government has almost finalized plans with the Russian nuclear firm Rosatom to construct the power plant.  Construction should be completed by 2022.

The site for New Alamein was chosen specifically to attract surplus population from the Nile valley and because it provides opportunities for economic and social development.  The New Alamein site is in close proximity to Alexandria.    However, the region does face ongoing issues that will need to be addressed for the New Alamein project to come to fruition.

Landmines are a major issue facing the development of New Alamein and the northwest coast in general.  There were an estimated 17.5 million land mines left behind by World War II troops in many areas of the Western Desert.  While the Egyptian military has been working to remove landmines since 1983, there are still millions buried and unexploded ordinances spread throughout the Alamein region.

In anticipation of construction projects the Egyptian military has cleared by the end of 2015 26,190 acres of landmines on the New Alamein site.  The Egyptian government, United Nations Development Program, the United States Agency for International Development, and the European Union, have all supported and worked together to fund costly demining activities in the north west coast.  The Egyptian government estimated in 2009 that the Alamein fields alone would require more than an EGP 177 billion ($20 billion) investment to be demined, with cost ranging between EGP 2,600 – EGP 8,800 ($300- $1000) per mine.

Water scarcity is another issue that challenges development of New Alamein and the northwest coast in general.  There are limited quantities of surface water available in the region and it mostly comes from rainfall during the winter season.  With improved infrastructure, this water could be captured and used for irrigation.  Groundwater resources are more extensive but much of the water is brackish and water quality varies greatly from place to place and seasonally.  Treated water is pumped from Alexandria through the Marsa Matrouh Governorate, but there is often insufficient water.  The Egyptian government recognizes the water scarcity issue and has plans to build a desalination plant in Alamein.  The public-private partnership unit of the Ministry of Finance plans to offer the Alamein desalination project to investors before the end of the fiscal year.  However, until funding is secured, the problem of watering New Alamein remains a serious challenge.

A City for the Future

If New Alamein lives up to its many promises, then the city will have a significant impact on Egypt’s future.  The timely and successful completion of New Alamein could provide a model for how Egypt should address many serious issues: what to do with the growing urban population around the Nile River, water shortages, the energy crisis, economic instability, high unemployment.  If New Alamein is a success, then it could also be the first of many eco-city projects in Egypt that address broader global issues of climate change and sustainability.  New Alamein represents a new perspective on city planning and construction and can help lead Egypt into a sustainable future.