The Rise of Single Female Homeowner

Single ladies, put your hands up, but if you seek to buy your own home, raise them even higher! Single women may not have as much purchasing power compared to their male counterparts, but they are apparently not letting that hinder them from achieving homeownership. It is not just 30-something ladies who are purchasing their homes solo, but also baby boomers – those born between 1946 and 1964, divorcees, and separated women are also forcefully building on the growing trend. 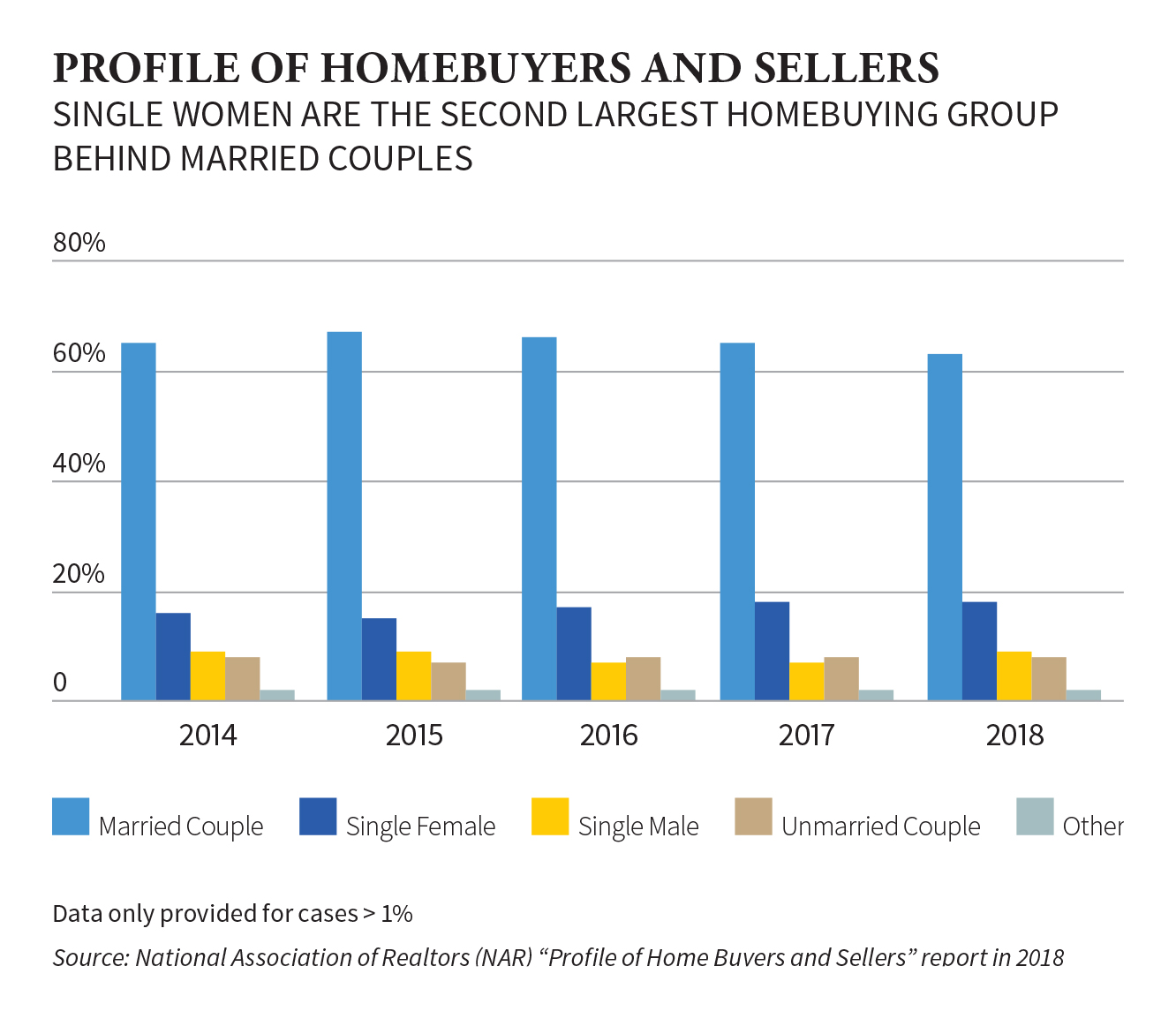 In the US, for example, a 2018 Zillow study shows that female singles can afford to purchase 39% of homes in the market, yet the National Association of Realtors’ (NAR) 2018 “Profile of Home Buyers and Sellers” report indicates that they are outpacing single males in terms of home purchases. The study says that single females are steadily making up a huge chunk of the US real estate scene, hitting roughly a fifth – or 18% – of all homebuyers in 2018, and marking the second largest homebuying group behind married couples.

Single men, however, were less willing to settle down for a new property, making just 7% of home purchases in the same year, despite earning a higher average income than their female counterparts – roughly USD 69,600 per annum.

Such indicators were triggering enough for Invest-Gate to probe whether more females in Egypt, other than American single women, have been shopping for new homes as well, especially with the latest data reported by the Central Agency for Mobilization and Statistics (CAPMAS) revealing that about 198,000 divorce cases had occurred during 2017, marking an increase of 3.2% over 2016.

What Egyptian Single Women Hunt For?

For starters, in order to properly study the single women’s dynamics in the real estate market, Invest-Gate has conducted an online survey that was filled in by 15 singles, including seven divorcees, six unmarried females, and two separated ladies, who are residing in Cairo with an average monthly income of EGP 14,200. The greater part of the respondents – or 46% of them – are between the ages of 18 and 24 years old, while 28% are between 25 and 34 years old, and 12% average 55-64 years.

Through the survey, it has been estimated that 45.5% of those females have opted for a resale unit and another 27.3% settled on the primary market, handpicking their houses at mainly New Cairo and Nasr City, while only 9% of the participants have decided upon renting a property in the same areas as well.

It was not only this survey’s respondents who deem the resale market as an optimum preference. A poll conducted by Invest-Gate on the favored market of single women showed that resale is the most opted for by such segment, gaining 42% of the overall votes, while other markets such as primary and rental were less favorable at 32% and 26%, respectively.

– What Drives Single Women to Decide Upon Resale Market?

When our participants were asked regarding such matter, there were varying responses put on plate, notably: Bigger unit size, preferred location, shorter wait time before occupying the premises, and more room for negotiating the price or terms of sale.

However, the foremost purpose that drove them to settle on resale units was that “they are much cheaper than first-hand properties.”

Piggybacking such results, a report published in July 2018 by Arab African International Securities (AAIS) showed a decline in prices in the Egyptian resale market by 30-50%, compared to similar units offered in the primary market, indicating that properties in the latter market are overpriced. In spite of that, participants of Invest-Gate’s survey, who went for the resale market, pinpointed that they had some regrets regarding buying a resale unit, prominently for choosing a location that has no future investment value, as well as, not waiting to be more financially secure before making the final buying decision.

In the same manner, for those who chose the primary market, purchasing a resale unit was a poor choice. This is mainly because around 67% of the respondents who opted for a first-hand property bought their units through installments, believing it was a smart decision, considering their monthly income and marital status. Simultaneously, the remaining 33% purchased their units via mortgage loans, revealing that such payment method has made buying their properties more feasible.

According to the majority of the surveyed single female homeowners – or 70% of them, purchasing their own home is a valuable investment that they can rely on in the future, while 87.5% of the total participants believe that all single women would buy a house if they could afford to, seeing that buying a property is a smart money decision over renting one.

All respondents believe that renting is not a good choice, particularly in Egypt, but what precisely is warding them off the rental market? According to Invest-Gate’s survey results, this is due to multiple reasons that vary between the notion that renting a property does not provide the services and facilities these single women need, in addition to that rent prices in the Egyptian market are seasonal, and thus, buying a house is deemed safer than renting one.

For the time, it looks like the resale market is the primary preference for the greater number of single women in the Egyptian real estate market. About 65% of the surveyed participants advise other single females to seek a resale unit, and avoid renting and purchasing first-hand properties, while also looking at homes in already-existing areas, since “they would be naturally put up for sale at lower costs.”

After all, the responses of surveyed participants are only part of a growing population of single females who are gradually forming the composition of Egyptian households and adding up to the growing trend of solo female homeowners. Here we mention stories of two single women who made it to living on their own!

Marwa Gabr, a 45-year-old divorcee, decided in March 2017 to buy her first home, a 265-square-meter resale unit in Nasr City. This followed ten years of moving from one place to another, renting, or staying with her relatives, while she was trying to build her credit. After roaming around five distinct addresses, Gabr, who currently earns an average monthly income of EGP 30,000, decided it was time to become a homeowner.

“After my divorce, the time to buy a new home has always been now. I have three children, two of which still live at home. I wanted a space I can customize and create as our haven, while also having it as an asset or a future investment that I can count on.”

“I looked at what my long-term goals were, and realized I wanted an apartment with a small payment because I wanted to put more money away for my kids. Opting for units in a low demand area such as Nasr City opened doors to affordable price tags, where I bought my housing unit for nearly EGP 800,000.”

“The total sum of money you’ll pay at the end of the day solely varies based on the area you’re deciding upon. It’s also really important to consider the finishing, furnishing, and maintenance costs, besides the unit’s value, when buying a new property.”

My advice for all women seeking a mortgage loan is to “look for homes that cost no more than 2.5 times the annual income,” as a smart way to pay off the debt in a quicker manner.

Another example is Randa El-Taher, who is in her mid-thirties and works as a real estate agent in Cairo. Back in 2014, she purchased a studio – where she currently lives – in New Maadi, south Cairo, for roughly EGP 290,000, with a down payment of only EGP 40,000.

Back then, being a 28-year-old homeowner was a challenge not many of my peers may have had at this young age. I have been eagerly working and saving money since I was 18 to the extent that I had the down payment ready in full back when I decided to move out of my family’s house and settle in a fully-finished property.

“I was excelling professionally and my salary was sufficient enough to spend and save at the same time. Although it was a resale unit, the landlord was a decent guy that allowed me to pay in installments,” For five years, “I used to pay almost EGP 5,000 each month, back when my monthly income was around EGP 15,000, depending on the number of sales I made, which was a good deal for me.”

Half a century ago, women could not issue a credit card, much less a mortgage, without her husband’s or father’s signature and it was incomprehensible that females one day would not only purchase their own homes, but also go to college at a rate higher than that of men, and thus, relish substantially high salaries and become more financially independent. According to the Global Gender Gap Report 2018, enrollment in tertiary education among Egyptian women stands at 35%, while males account for 34% only.

As a realtor, El-Taher says:

“It is indeed outdated to assume that a single female can’t afford to buy a home for they are now increasingly looking to become homeowners and to start building equity, regardless of their marital status. I know many divorced, separated, and unmarried ladies who were able to purchase a house only through their monthly income; it’s simply a matter of being mindful of your own money.”

In conclusion, despite the challenges, many unmarried women are finding ways to make homeownership a reality. If current trends continue, single ladies will become more economically empowered and the view of female ownership will continue to show more growth in all key metrics in the near future.

Read more about single females in the real estate scene on pages no. 40 and 42 at our March issue.