The Untapped Potential of Ecotourism in Egypt

Despite its maximal potential in terms of bankable natural resources, the concept of ecotourism in Egypt seems all but alien, with only a handful of areas making use of a more sustainable approach to attract a different type of tourism to Egypt’s shores and valleys.

Though many countries of similar economic standing–such as India, Indonesia, South Africa, and a number of countries in South America–have invested in diversifying their tourism revenues through the introduction of eco-lodges, protectorates, and other eco-conscious attractions, Egypt has yet to tap into its full potential in this regard.

Nuweiba and Siwa stand out as the immediate, obvious choices of ecotourism hotspots, and while they have drawn a specific clientele over the last three decades, the growth of such tourism there has been somewhat arbitrary.

Moreover, ecotourism in Egypt is still susceptible to the same types of market shocks as the remainder of the industry, with Nuweiba having been particularly affected by the continuous threats and incidents in the Sinai peninsula. However, setting aside the recent setbacks that have struck the tourism industry as a whole, the few examples of ecotourism that did take off in Egypt managed to flourish over the past years, contrary to expectations.

Perhaps one of the most significant, if not the oldest, examples of an ecotourism venture in Egypt is Basata Village just north of the Port of Nuweiba in South Sinai. When it launched in 1986, the idea of an eco-lodge or village was all but unheard of in Egypt, and the Nuweiba coastline was, similarly, all but empty.

Seeking to create a new form of environmentally conscious tourism, Sherif El Ghamrawy, originally an engineer from Cairo, sought a back-to-basics approach to tourism, wherein self-service and waste reduction are the mottos that dictate the ethos behind the camp.

When the village was launched 30 years ago, nobody imagined that it would herald the dawn of a boom in Nuweiba, whereby a tourism industry was born out of this simplified, back-to-basics approach.

Oftentimes, it was either Cairenes or other city-dwellers escaping to launch yet a new camp, or it was the indigenous bedouin population seeking to capitalize on this new trend. Despite the presumptive tensions that have existed between the two different lifestyles that sought to cohabitate in the same land, a new model was able to emerge and harmonize with the surrounding landscape.

Nowadays, the coast of Nuweiba is dotted with countless camps, and despite a major drop in numbers due to the tensions in the north, camps like Basata continue to draw tourists, both local and international.

Further, taking it one step further in his approach is Maged El Said, owner of Habiba Camp and its environmental mainstay, an organic farm and learning center that seeks to revolutionize the lives of many, both locals and visitors alike.

Built on the motto of “Synergizing Differences”, Habiba seeks to draw from a large variety of different approaches and philosophies in order to make a lasting difference and revolutionise the way members of the local community goes about their day-to-day lives.

“I was inspired by the bedouin lifestyle when I visited Sinai, and by the desire to counter the negative effect tourism had in terms of diminishing their way of life,” El Said told Invest Gate.

“Bedouins were attracted by the easy money opportunities provided by the tourism industry, but this was diminishing the thing that attracted me to the area in the first place.”

Furthermore, when the larger hotels came, there was no attempt to build an inclusive business model whereby the local population could also profit from the industry, which had a negative long-term effect on the community, according to El Said.

Habiba builds on the concept of sustainable development by providing the local population with the tools through which they can not only sustain a living, but also ensure profitability by introducing non-traditional agricultural methods that allow for growing food in the desert climate, without relying on the seasonal rains as bedouins normally do.

By engaging the local community and providing agri-tourism as an alternative type of tourism, El Said believes he can hedge against the regular shocks in the market, while maintaining profitability, both on a personal level and on the level of the community.

His model aims to address food scarcity in the community, and in the meantime he has attracted volunteers–both experts and amateurs–from all over the world, some of whom remain at Habiba for months or years at a time.

“Ecotourism is actually more profitable than traditional tourism, even if considered in purely economic terms,” contended Samy Solaiman, Head of the Investors Association of Taba and Nuweiba.

By targeting a different touristic segment that is seeking out this form of tourism, a successful model can become profitable, as ecotourism “relies on materials that are far less costly, and guests seeking out this kind of tourism are not seeking technology [in their lodgings]. Therefore, we are conserving both costs and energy, in addition to conserving the environment, which has long-term benefits,” Solaiman said. 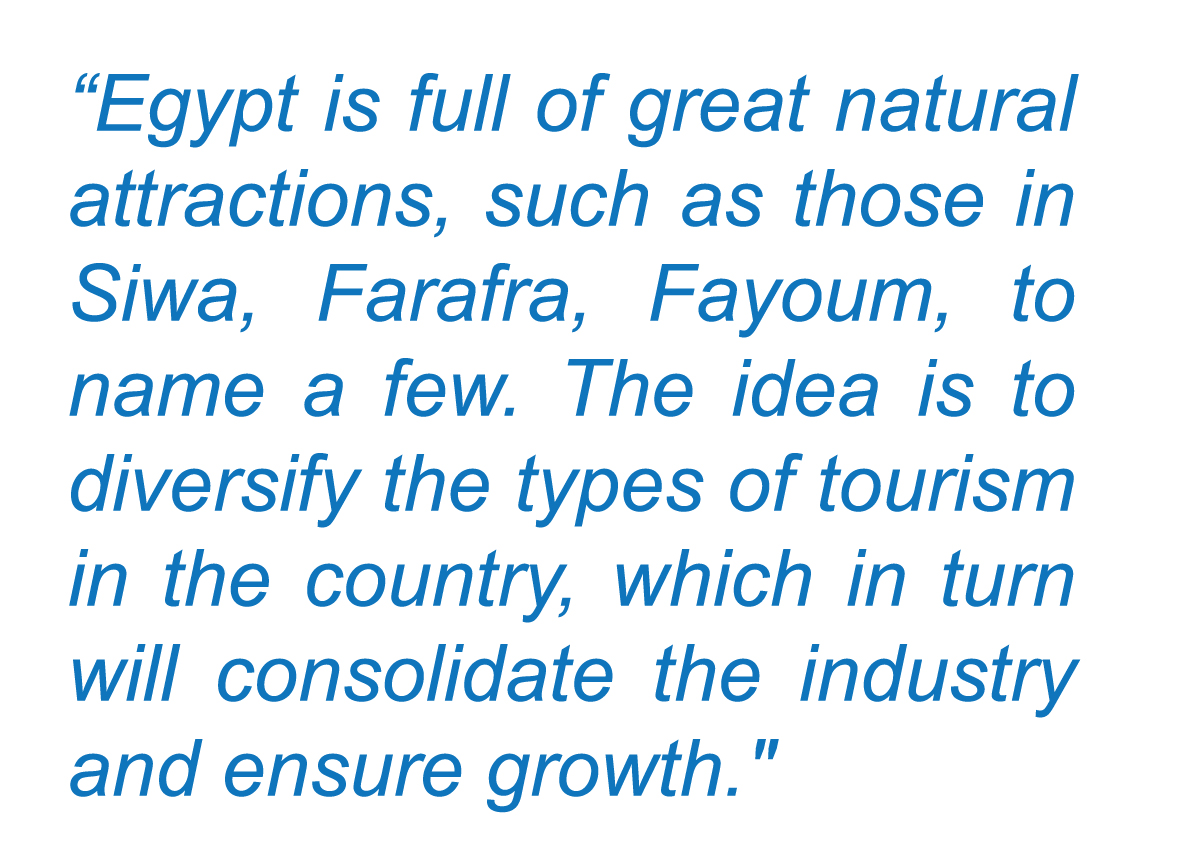 The head of the association also believes that similar models to the one in Nuweiba can be replicated elsewhere, while avoiding some of the same problems encountered in the South Sinai area.

“Egypt is full of great natural attractions, such as those in Siwa, Farafra, Fayoum, to name a few. The idea is to diversify the types of tourism in the country, which in turn will consolidate the industry and ensure growth,” Solaiman said.

Indeed, the Farafra Oasis, as well as other places such as Marsa Matrouh, could become prime spots for drawing a type of tourists who are more likely to seek out a frills-free experience, in exchange for the opportunity to witness and contribute to the naturally-occurring attractions.

Moreover, in the Siwa Oasis, a number of lodges, such are Adrere Amellal, have proven that a sustainable approach and a luxury experience are not necessarily antithetical, wherein five-star accommodation is offered with all the luxuries and comforts, but electricity is one luxury that guests discover they can afford to live without, provided instead with all-natural lighting and encouraged to leave their phones and electronics at the door.

Another example is Hawyet Siwa, an initiative built on environmental and social sustainability, run by Fares Hassnein, who works on documenting and researching the cultural heritage of the region.

Solaiman further continued that other areas he mentioned present an opportunity to build on the ecotourism prospects, without “repeating the same mistake that was made in Nuweiba, [which is] building five-star hotels next to camps and eco-lodges. Those are completely different types of tourism, and those who are seeking ecotourism lodges and camps are not going to be attracted by a five-star air-conditioned hotel.”

This comes as questions are raised over the long-term environmental cost of traditional tourism, and the long-term sustainability of certain touristic practices. One of the most environmentally threatened areas, due in part to irresponsible diving practices, is the coral reef in the Red Sea. Corals are an endangered species, and Egypt’s Red Sea area boasts some of the the largest and most attractive coral reefs globally.

While practices have improved and efforts to protect the reefs have been introduced, there has nonetheless been irreversible damage done, not only to the reefs, but to the overall marine biodiversity of Egypt’s waters. Recent sightings of whales, as well as shark attacks, point to the potential that there are unforeseen effects on the ecosystem due to interference in the naturally occurring biodiversity.

Solaiman cites overfishing as the main cause for shark attacks, noting that this problem was overcome in Nuweiba and Taba through fish farming, preventing the overfishing and displacement of naturally occurring species of fish in the surrounding areas, which in other places has caused shark attacks.

He further notes that traditional approaches to tourism and ecological sustainability are not mutually exclusive, pointing to the going green initiatives and developments that have begun to take corrective steps against previously employed destructive practices.

Indeed, ecotourism as a branch of diversification of a country’s touristic resources has often proven to be a very successful model. One need only look at the examples of the nature reserves in India’s Rajasthan province to understand how a conservationist approach can also be translated into an opportunity to target a different tourism market.

The countless nature and wildlife reserves provide ample opportunity for ecotourism lodges, and the model that has been built through offering a wide range of different lodging styles to suit the environs offered by each nature reserve.

These lodges have become widely popular, and draw a different crowd than that which would be drawn to India’s cultural or historical tourism. The opportunity to visit captivating sites in a country that is otherwise known for urban overcrowding often proves to be an irresistible draw.

Moreover, Solaiman stressed the notion that Egypt’s tourism industry has not been “struck”, so to speak, rather it is a question of shifting the culture that dictates the way the industry deals with different crises.

“Rather than taking every incident as an opportunity to defer blame or ask for more aid, the more logical thing to do would be to deal with each issue that arises with a sense of humanity, and in turn that would evoke sympathy and encourage tourism, rather than stir fears. There is no ailing tourism industry, rather an incorrect way of dealing with it,” he said.

Similarly, this calls for an understanding of the distinctions between different kinds of tourism, and the advantages provided by diversifying the kinds of tourism on offer, as this can only serve to hedge against any risks or shocks that could otherwise affect the market.

Thus, from both a cost-cutting standpoint and in terms of sustainability–in relation to the market as much as the environment–ecotourism could potentially be the next trend to place bets on, if it is cultivated correctly and for the right reasons.

Though numbers are scarce in Egypt, other countries with similar economic conditions, such as India, have seen major returns from the ecotourism industry. In a research paper specifically focused on Parambikulam Tiger Reserve in Kerala, the growth of India’s ecotourism industry alone is estimated at 20-34%, a massive number compared to more traditional tourism. The paper further shows that an approach that is more community-based is more likely to inspire innovation and enterprise in the local community, thereby strengthening the local tourism industry and improving service by building the correct tools for competition.

Egypt’s geographical landscape offers more than urban dwellings and resort towns, and it is time to think outside of the age-old misconception that profitability and sustainability stand on opposed poles.

Joana Saba is the Editor-in-Chief of Invest-Gate. She has a background in journalism, literature, and the arts, with an interest in politics and philosophy. 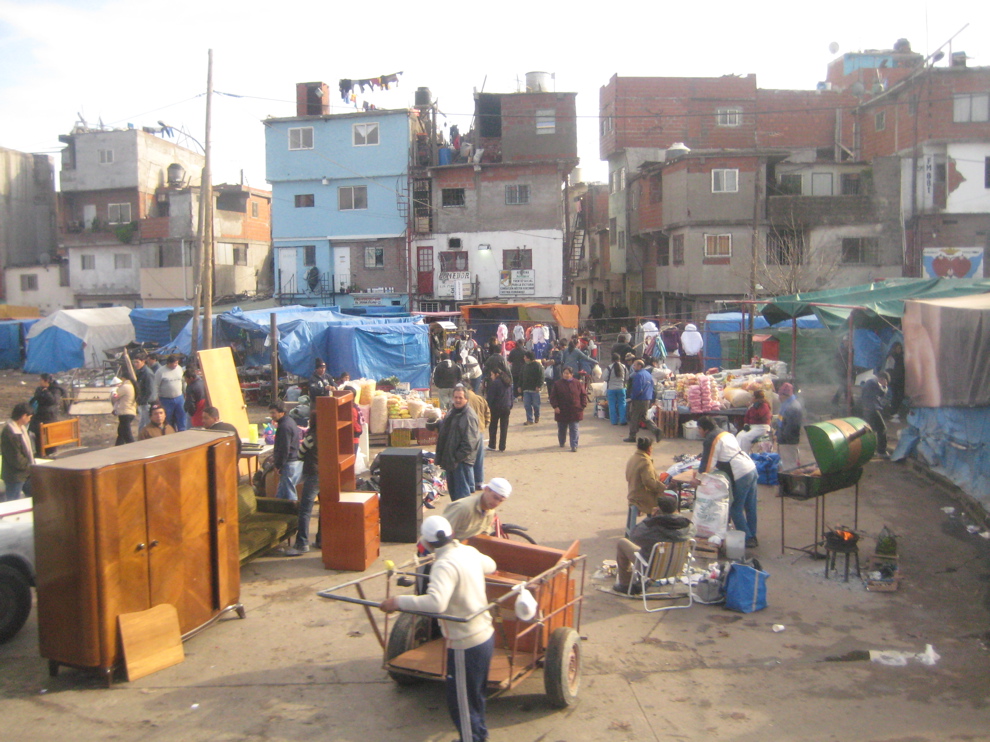 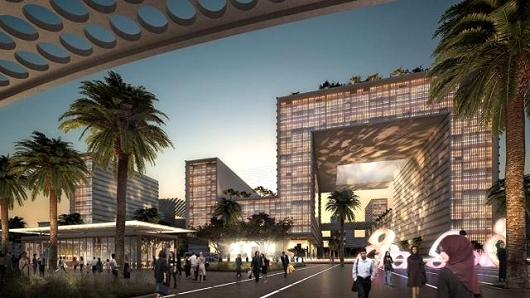 Administrative Capital Units to Go on Sale in Q1 2017 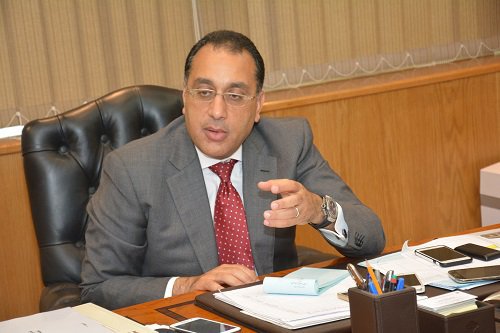