Being one of the fastest-growing construction companies in Egypt, the company conducts extensive surveys in the local market and the region to build its plans and strategies based on those findings.

Ahmed Saleh, deputy chairman of Al Alamia Furniture and Dar Al Alamia Developments, states that the company has worked with several government agencies, the presidency, the ministries of defense and interior, the Military Engineering Corps., Banque Misr, Better Home, the Arab Organization for Industrialization, and New Urban Communities Authority, among others.

The company also built 100 villas in R1 and R2 districts in NAC. In addition, under construction are four faculty buildings in the Japanese University in Borg El Arab, Qena University, and New Suez Canal University. 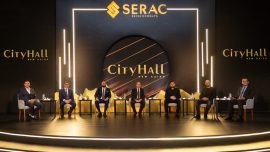