The General Authority for Investment and Free Zones (GAFI) is currently considering the establishment of 19 new free zones in some governorates, which will contribute towards boosting investor services in Egypt, Invest-Gate reports.

The new investment free zones are expected to generate more than 120,000 job opportunities across Egypt, including the governorates of Minya, South Sinai, New Ismalia, Giza, Dakahlia, Aswan, and Kafr El Sheikh where seven free zones are being constructed, the Egyptian investment ministry said in a statement on December 26. 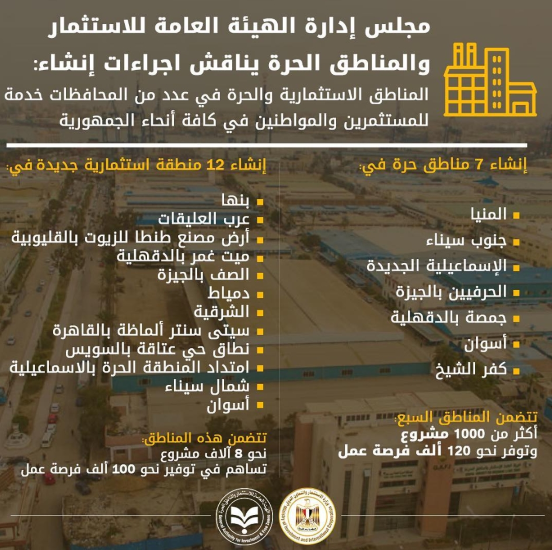 The seven new areas are expected to comprise more than 1,000 projects, according to the statement.

Meanwhile, the awaited 12 free zones will include about 8,000 projects that will contribute to creating nearly 100,000 job vacancies.

The remarks came when GAFI’s board held a meeting topped by Minster of Investment Sahar Nasr, in the presence of GAFI’s CEO Mohsen Adel, to discuss the establishment of the new free zones and a number of related structural and organizational procedures, aiming at improving the Egyptian investment climate.

The minister noted that automation of the work procedures in the free zones began in Nasr City’s public free zone as a guiding model, adding that the project will be generalized in all the free zones in the near future.

The new system targets linking the databases of a single project with the distinct regional administrations, as well as seamlessly monitoring the new projects to avoid any attempted smuggling due to the frequency of incoming and outgoing messages, she elaborated.