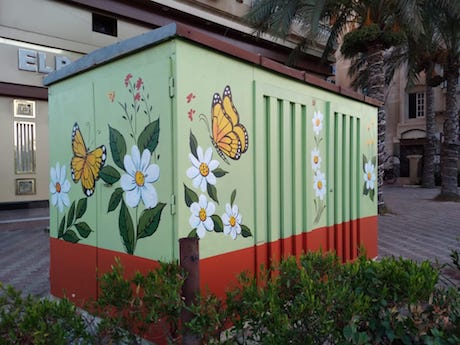 New Damietta City Authority launches an artistic initiative to beautify the city, turning all electricity units into colorful descriptive  paintings, Invest-Gate reports.
Mohamed Ragab, head of the New Damietta Development Authority and the supervisor of New Mansoura City, announced the launch of the initiative, as part of the New Damietta Development Authority’s keenness to enhance the residential areas in the city by providing a quality of life for the inhabitants.
Ragab further clarified in a statement published on Sep 14 that this process will transform the electricity units to artistic counters, and ordered the removal of all the posters and advertisements that were previously placed.
Ragab also added that the improvement of the electricity booths will take place across all neighborhoods and axes of the city.
Moreover, he stressed that all legal measures will be taken against companies and entities that still post advertisements on such units, walls, and all public facilities, if the law is violated.