Cook’s Club, which was rebranded from “Arena Inn” and is set to inaugurate in August, is among a series of six branches of this newest line of hotels to make debut this year, after earlier launching the concept in Turkey, Spain, Greece, and Bulgaria. Bringing the world’s 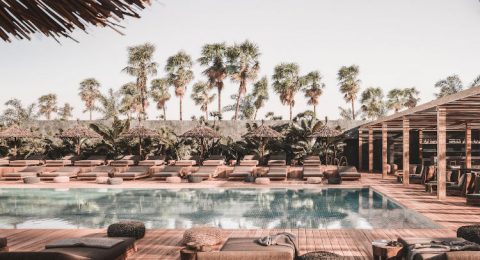 best street food and cocktails to the beach, the 144-room property is nestled along a saltwater lagoon, near the downtown area and a short walk to the seashore, Thomas Cook said in a released statement on June 20.

The anticipated Casa Cook, however, is scheduled for kickoff next October, marking the company’s fifth hotel in this brand portfolio, with more developments in Greece and Spain. It provides families with a cozy setting that blends modern designs and local Arab touches, while being fenced by deserts and palm trees.

Guests can relish the property’s spa, explore the area’s archaeological treasures, or take advantage of its golf courses and watersports, while the little ones enjoy Casa Cook’s “bespoke kids club.” Accommodation ranges from standard rooms to villas, all accompanied by private terraces. In addition, junior suites feature shared pools while villas have private ones, “most of which have stunning beach views and direct access to the sandy shores,” read the statement.

Commenting on the move, Chief of Tour Operating at Thomas Cook Will Waggott underlined, “Our new Cook’s Club and Casa Cook will be great additions to our holiday offering and will appeal to golfers and water sports enthusiasts, as well as, those looking for some winter sun at a great price.”

On another note, Waggott explained, “Egypt is proving really popular among our Thomas Cook Group customers, with bookings up 15% for summer 2019 and 57% for winter 2019/20, compared to last year.”

Earlier on December 19, Orascom Development Holding’s hotel subsidiary Orascom Hotels Management inked an agreement with Thomas Cook to establish a new beachfront hotel property in El Gouna, in addition to rebranding another one in the city, according to a previous statement.